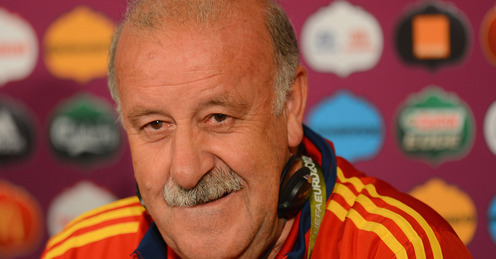 Vicente del Bosque: The Spain manager has decisions to make on his team selection

Spain continue the defence of their Euro 2012 crown on Saturday when they take on France in a mouth-watering quarter-final.

Vicente del Bosque's La Roja have not been defeated in a competitive match since being shocked by Switzerland in the group stages on their way to winning the 2010 World Cup.

Meanwhile, Laurent Blanc's Les Bleus have lost just once, against Sweden in their last match of Euro 2012's group stages, in 24 games.

It therefore promises to be a closely-fought encounter in Donetsk and the winner will go through to face Portugal in the semi-finals.

Both France, 1998 world champions and 2000 kings of Europe, and Spain are two of the highest praised nations over the past 14 years of international football.