Germany manager Joachim Low described Greece as 'survival artists' prior to kick-off, but it is Low's countrymen who know how to survive, and how to prosper, in international competitions.

For the 20th time in 28 tournaments, Germany are in the semi-finals. That's what you call a record, and whether it be England who meet Germany next Thursday in Warsaw, or
Italy, it will be the Germans who are favourites.

Displaying the sort of adventure, both in selection and style, that has made even previously hostile neutrals warm to them, Low's side gave a convincing account of themselves last night. 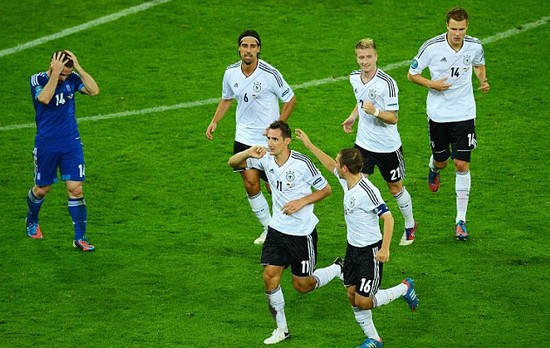 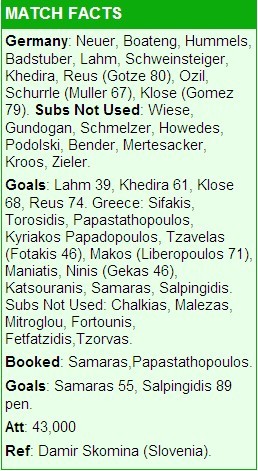 Greece did score twice, which will encourage optimism in Germany's next opponents, but then they could have conceded several more.

If there were German faults, they were wastefulness in front of goal in the first half, and being susceptible to counter attack. Roy Hodgson will have noted that. But it was the overall impression of fluid movement, personified in Mesut Ozil, that will linger.

That and two volleys, from Sami Khedira and Marco Reus, which came from their dreams.
Captain Philipp Lahm also scored a 20-yard belter, the only routine goal being Miroslav Klose's close-range header.

Greece goalkeeper Michalis Sifakis was at fault as Klose nodded in his 64th international goal, and he was maybe partly culpable on Lahm's opener, too, but defeat was hardly his responsibility.

Low had forecast wave after wave of German attack crashing on to 'Greek rocks' and that was what transpired. It must not be forgotten that Greece played without their captain and key man Giorgos Karagounis.

'It was a fantastic performance,' said Low. 'For the fourth time in a row we are in the semi-final of a major tournament. We have won 15 games in a row. And we are the youngest team in the tournament with great options for the future.'