In drawing with Spain and Croatia, and defeating Republic of Ireland, the Juventus defender believes the Azzurri have played better football than Roy Hodgson's men 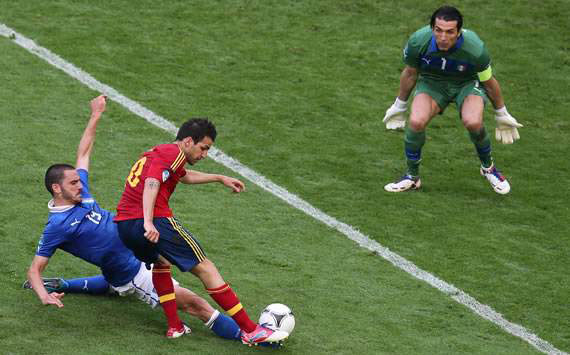 Leonardo Bonucci believes that Italy's performances in Euro 2012 so far have been superior to those of quarter-final opponents England.

The Azzurri progressed to the knockout stages behind defending champions Spain in Group C, while Roy Hodgson's side topped Group D ahead of much-fancied France.

However, Bonucci believes his side have played the better football to date and is therefore in a confident frame of mind ahead of Sunday's meeting with the English in Kiev.

"In terms of performance, we've probably been better than England so far in this tournament," the Juventus defender told reporters on Thursday.

"But the thing is, if you want to achieve a good result, you must be clinical in front of goal. You have to play your own game and be convincing in everything you do."

Italy's preparations for the game have been overshadowed by reports that enigmatic striker Mario Balotelli does not feel a part of the squad, but Bonucci insists the rumours are without foundation.

"I think Mario is integrated," he stated. "Yesterday, for example, he was smiling and joking around with [Antonio] Di Natale.

"I think Mario is a great talent and when he played as he did against Ireland [on Monday], he can really prove the difference."

Italy's eagerly-awaited last-eight encounter with England will kick off at 19:45.