A behind-the-scenes film about Spain's triumphs over the past four years has given team reporter Graham Hunter renewed respect for what Vicente del Bosque's team are doing.

Every tournament win is a jigsaw of a million pieces. You see the football but not the team talks, the bandages, the pairs of boots, the mounds of strips, shorts, waterproofs, socks, the audio visual aids, the fruit, the suits, the leisure wear, the computers ... you get the picture. But Spain have allowed us all behind the scenes, to watch how they won UEFA EURO 2008 and the 2010 FIFA World Cup. 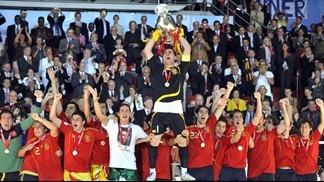 Called Campeones del Mundo (Champions of the World), the 100-minute film had many creative minds behind it. But without Pablo Peña, the man who captures the tactical videos of opponents for Vicente del Bosque, I doubt we'd be enjoying such a compendium of extraordinary images. Lovingly directed and full of superb highlights from the last two tournaments, what really makes this a gem is the amount of dressing room access Peña gains.

There is the emotional circle of players and staff before each game roaring "Un y dos y tres; Ganar, Ganar y GANAR!" (One and two and three; win, win and win). Then we see Del Bosque telling his men to be "brave", to "own the ball"; we see Luis Aragonés growling about "all the stick they've all been giving us ... now it's our turn to give some back" – it's an absolutely riveting delight.

Spain's players train by attempting to head the ball into a basketball hoop, they play one-on-one foot-tennis with a solid wooden 'net' which blocks you from seeing where your opponent is or where he's going to volley the ball – it is all about accuracy, reflexes and technique. You could watch it all day on loop.

Across the narrative, some themes stand out. You hear the words patience, intelligence, belief, technique, unity and teamwork time and again, likewise the order to "own the ball".

Sergio Busquets embraces Xabi Alonso, Gerard Piqué praises Sergio Ramos glowingly, Cesc Fàbregas and Iker Casillas share a powerful moment of mutual support before the final. Once they pull on the red shirt, Spain are one, a united family. Campeones del Mundo is a wonderful movie about a special era. Catch it if you can.