The attacker believes the Azzurri are harder to play against due to their more defensive nature, while pointing out that the holders often struggle against Les Bleus 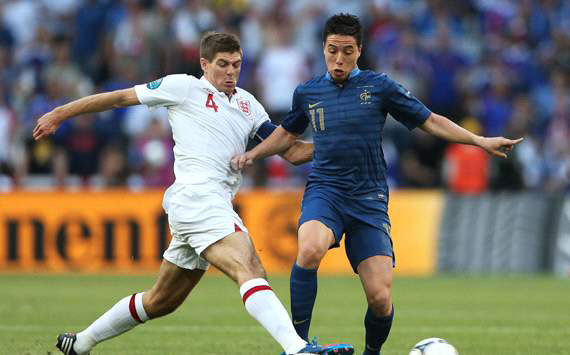 France midfielder Samir Nasri has dismissed suggestions that Spain are favourites for Euro 2012, claiming he would rather play against Vicente del Bosque’s team than Italy.

Following a far from convincing showing in Group D, picking up four points, Nasri believes Les Bleus dodged a bullet when they managed to avoid Cesare Prandelli’s side.

Ahead of the quarter-final against Spain, the former Arsenal man also claimed the holders are not nailed on to win Euro 2012, adding that he feels Germany have been the most impressive.

Speaking to reporters, Nasri said: “I don't think Spain are favourites for the tournament, the Germans have impressed me the most.

The Manchester City midfielder also spoke about France’s 23-match unbeaten run that came to an end against Sweden, insisting it was better to lose the sequence when three points were not essential rather than against the likes of Spain.

He continued: "Qualifying for the quarter-finals gives us confidence and we will try and cause an upset.

“The unbeaten run was anecdotal, it had to end sometime. You can't stay unbeaten forever, and it's better that it happened in a match where we qualified anyway.

“Now we have to go back to work and prepare for Spain. The objective was to reach the quarter-finals.

“If people had said two years ago we would be in the quarter-finals of the European Championship, we would have signed up for that right away. So we can't complain."

However, Nasri’s international team-mate Yohan Cabaye is not quite as confident about France’s chances against Spain.

He told reporters: "We have three days to prepare now for our next game and we have made it harder for us. It is going to be difficult.

“We have to be better but the most important thing is we have to have a better mentality. I hope we learn, we do the right things from now on and we play like a team.

“We've always played like a team, not like [Tuesday night]. Spain are the best team in the world so we are going to have to play like it is the final.

“If we play like we did against Sweden we haven't got any chance of beating Spain. We know this."