Unbeaten in 23 games, Les Bleus had been confident of progressing to the last eight as winners of Group D but they had to settle for second place and a tie against the holders 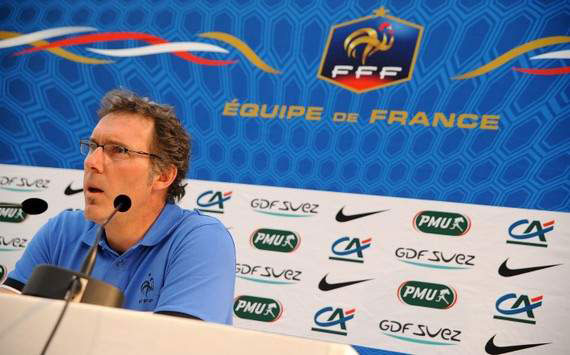 Laurent Blanc has played down France's hopes of defeating Spain in the quarter-finals of Euro 2012 after watching his side stumble into the knockout stages on the back of a shock 2-0 defeat to already-eliminated Sweden.

Les Bleus had gone into their final Group D fixture unbeaten in 23 games and confident of holding off the threat of England to claim top spot.

However, they were undone by goals from Zlatan Ibrahimovic and Sebastian Larsson and ended up sneaking into the last eight, where they will now face reigning world and European champions Spain.

"The aim tonight was to win and finish first in the group, but we were not able to do that and we must just deal with it," the former Bordeaux boss told reporters after the game.

"The problem with Spain is that they don't give you the ball. We need to get at them on the counterattack and cause problems for them that way. Croatia showed us the way to do it. They didn't have the ball much, but when they did, they used it well and, in my opinion, that is what we need to do.

"But we must be realistic. In Spain we will be meeting one of the best teams in the Euros, and also, in my opinion, the world. [However] if we had been told when we took the team in 2010 that he would reach the quarter-finals of Euro 2012, we would have signed up for that immediately."

Blanc declined the invitation to admonish his star players for failing to deliver but he did concede that he desperately hopes that striker Karim Benzema rediscovers his goalscoring touch against La Roja after failing to find the back of the net for the third successive game.

"Benzema needed to score, as did all of our forwards," he confessed. "He tried many things but he just could not score. I hope that he breaks his duck against the Spanish in the quarters.

"But I don't like to talk too much about individuals. Tonight, everyone had a bad game and I will not dwell on the performances of individual players.

"When you are accustomed to good results, there is always going to be disappointment and frustration when a bad result occurs.

"We did not expect a game like tonight. There is disappointment on the part of the players and the coaching staff.

"But that is understandable and we just have to be calm and to return to Donetsk to prepare for the game against Spain."