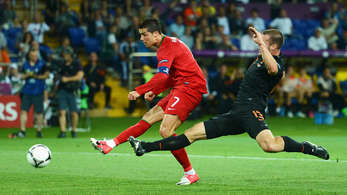 Ronaldo was irresistible throughout as he led his side to a last-eight appointment with the Czech Republic in Warsaw on Thursday.

The 27-year-old responded to criticism of his form with a mesmerising display topped by a goal in each half to ensure Portugal finished the 'group of death' as runners-up behind Germany.

Apart from a fine early strike from Rafael van der Vaart, Holland were poor, ensuring a team considered among the pre-tournament favourites finished bottom of Group B without a point to their name.

The match was 11 minutes old when Holland's hopes of reaching the quarter-finals were given a shot in the arm.

Bayern Munich winger Arjen Robben weaved a path to the edge of the area where Van der Vaart was waiting to steer an inch-perfect finish into the bottom left corner.

A moment of madness from Gregory van der Wiel almost saw Holland concede the advantage but, having inexplicably passed the ball to Helder Postiga, he watched in relief as the Portugal striker shot wide with only Maarten Stekelenburg to beat.

Stekelenburg then kept out a well-struck header by Ronaldo, who would not be denied in the 28th minute.

The initial damage was done by Joao Pereira's defence-splitting pass and Ronaldo rewarded his vision with a composed first touch and slick finish.

Nani missed narrowly, but it was Portugal's captain who was the prominent figure on the pitch as he twice went close to seizing the lead.

Holland's defence was in danger over being over-run with Ronaldo cast at their tormentor in chief with Portugal pushing for a second.

The Real Madrid forward continued to attack the Dutch early in the second half, but his side should have trailed in the 53th minute.

Wesley Sneijder crossed from the left to the unmarked Ron Vlaar only for his clumsy attempted header to drift off-target from close range.

Postiga had a goal disallowed for offside before Fabio Coentrao was denied by sharp reactions from Stekelenburg, who then frustrated Nani from point-blank range after a marauding run by Ronaldo.

The Portugal wingers combined once again in the 74th minute, and this time Holland cracked.

A swift counter attack ended with Nani feeding a long pass to Ronaldo who dummied his shot, took the ball into space and prodded home.

Van der Vaart curled an effort onto the right post as Holland produced a strong finish, but there was still time for Ronaldo to hit the woodwork.